The Business, Computer and Information Technology Department is proud to recognize the Neshaminy Future Business Leaders of America (FBLA) members. This year the club wanted to raise funds for the 2017-18 state project, Alzheimer’s Association.  The students sponsored a 5K Walk/Run at the high school in November, sold t-shirts, raffled donated baskets and collected change, totaling over $3,300.  With their effort, Neshaminy received top honors placing 3rd out of 299 total state chapters in total funds raised, and 7th per capita.  The NHS Chapter also earned the “Gold Seal Chapter” and the “Outstanding Chapter” awards.

Thirty-eight Neshaminy High School FBLA members attended the State Leadership Competition on April 9-11, 2018 in Hershey, PA.  The students competed against the top winners in their events from across the state of Pennsylvania. 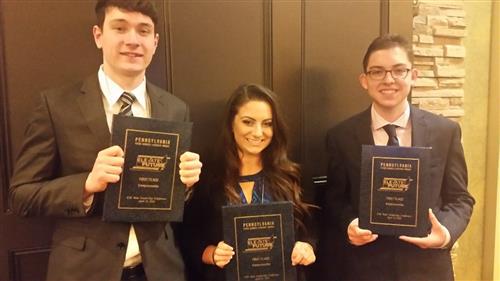 The NHS Entrepreneurship Team of Tom Mirarchi, Alyssa McErlain and Steven Muller took FIRST PLACE and will be heading to Baltimore, MD in June to compete at the National Level against the top finishers in the United States, Puerto Rico, the Virgin Islands and Guam. The team surpassed others in a 100-question test and made an oral presentation for a start-up business in front of five judges. Rebecca Bertel placed 7th in Investments and Stock Market.

Congratulations to these students for their efforts and their enthusiasm in leadership development and American enterprise!